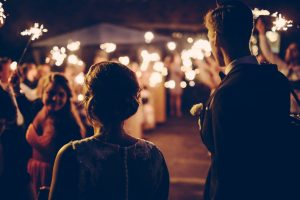 Photo by Andreas Rønningen on Unsplash

Let’s be honest, most people like fireworks. They’re pretty, loud, and remind us of our childhood. It makes sense then that 95% of the weddings I photograph end with a sparkler exit. Don’t get me wrong, I love a good sparkler exit, and that’s how I’ve created some of my favorite photos, but there need to be some other options out there. Recently, I’ve run into several venues that don’t allow sparklers, so my couple is left trying to find something else. Then there are the people that want to be unique, what do they do? Today I’m going to share 5 Awesome Wedding Exits that Aren’t Sparklers so you can see there are other options out there.

Most people get that same warm, fuzzy feeling about glow sticks that they do about sparklers. They’re fun and we connect to our inner child. The good thing about glow sticks is they aren’t really dangerous like sparklers. In most cases, sparklers are banned because the owner is afraid of something be lit on fire. With glow sticks, you don’t have to worry about that. People still get to wave them around, they put off light, but no one gets hurt.

I’ve seen the glow stick exit done in two different ways. The first is just like sparklers. Each person has one or two and they wave them around as the couple exits. This works well, and you can get some pretty cool motion blurs in the photos. The second way is called a glow stick bomb. Don’t worry, though, it’s not dangerous. In this situation, the glow sticks are much smaller and you need a ton of them. Each person gets a handful of like 5-10, and when the couple walks through, each person tosses them into the air. This can cause some havoc, but the photos look like an explosion of lights. 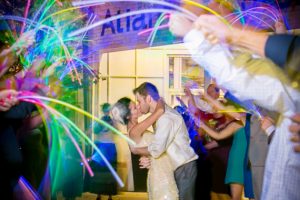 I use to play football, and one of the most exciting moments of the game was busting through the banner and running onto the field. The couple can have that same excitement exiting the wedding.

There are multiple ways to go about this. First off, the cost can be very little or expensive. You can choose to make your own banner out of the cheap paper they use at school or you could buy a custom banner that’s mean to break in two. Second, the banner can be positioned in a few different ways. The banner could be placed at the beginning of the exit so the couple runs through it, and then runs through the tunnel of people, or the banner could be placed at the end of the tunnel. Either way, this is a very unique and fun way to end the night for former athletes. 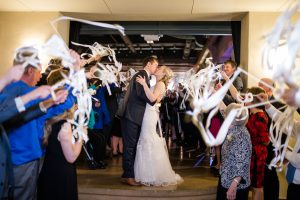 Courtesy of Jessica and Sarah Photography

Balloons are a relatively cheap alternative for the wedding exit, and can be done in a few different ways. One, balloons can pretty much be used the same was as sparklers, so each person would have one or two and wave them around. In this case, each balloon will need a little inside to make them glow. Two, balloons can be released  as the couple exits. This is a little harder to control because the balloons would need helium and have to be filled earlier in the day. It’s still exciting to see all the balloons go up into the air. Three, balloons can be filled with confetti and then popped. This might be the hardest one to pull off. Fill the balloons can be a task by itself, but popping them is the real challenge. Each person would need something sharp, which means kids might be left out. If it’s pulled off, though, this creates an explosion of sound and color! 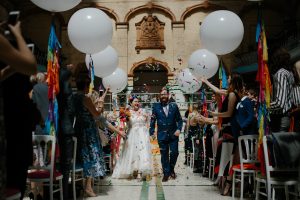 Photo by Tom Pumford on Unsplash

“We worked with a family member for photography and we also wanted to capture photos and video from guests. WeddingMix offered the best option.”

What a better way to say “We got married!” than having a marching band! This happy couple had a band escort them out of the church! Check out how they did this and more to have a memorable wedding day!

At one of my most recent weddings, the couple got an exit they weren’t expecting. Honestly, I don’t know what they were expecting, but when they came out they got doused with silly string and confetti from party poppers. The guests had so much fun doing this. They even shot me with some silly string before the couple started to exit.

There are some pros and cons to this exit. The good thing is that both party poppers and silly string is easy to find and pretty cheap. It’s also really fun for the guests. The big problem is the mess that it creates. Someones got to clean it all up, but I think it’s worth it. 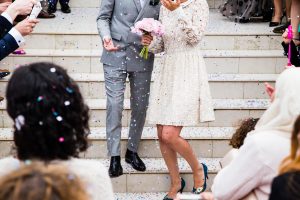 Anyone love a rock show? Treat the couple like big time rock stars and have them exit to a light show. The easiest way to pull this off is to have everyone pull out their cell phone, turn on the flashlight on low to medium, and have them wave it around as they exit. The more interesting, but more involved light shows requires more. Find several of the party disco balls or party strobes and stretch them out down the tunnel of people. For an added bonus, see if the DJ or someone can blast a song as they exit. Then, everyone goes into rave/dance mode. 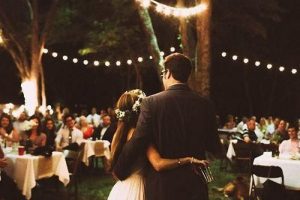 Whether your venue restricts you, you’re exiting before it gets dark, or if you just want to do something special, there are other wedding exit options besides sparklers. Share these ideas with your engaged friends and see what they think. I know I’m going to, and I hope I get to be photograph an epic exit!